This LibGuide features information and resources on some of the many different aspects of cosplay, including costume creation, fandoms, and conventions.

While it is aimed at those who may not be especially familiar with cosplay, we hope it will be helpful for novice and experienced cosplayers alike! 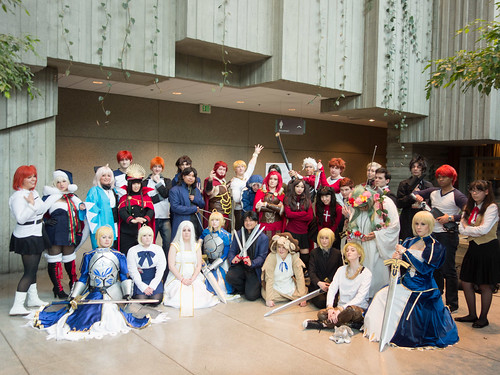 The term "cosplay" refers to the activity of dressing up like a favorite character and comes from the words "costume" and "play." While cosplay is often associated with anime and comic books, cosplayers find inspiration from a wide range of sources, including novels and television series. Costume design and assembly is often a big part of cosplay, and many cosplayers make their own. Costumes may be simple or elaborate, homemade or purchased, but all allow their wearers to embody a character of their choosing.

The cosplay entry in Wikipedia has a good overview of the history and practice of cosplay.

The cosplay area of this video game-focused blog features photographs of cosplayers and costumes from conventions and around the Web.

Cosplay basics: a beginners guide to the art of costume play by Jennifer Culp

This book, available through the Commonwealth eBook Collections, provides basic information on cosplay and features cosplayers from many different fandoms.

This book, available for request at several libraries in the Minuteman Library Network, provides information on planning, designing, and construction costumes, as tips on how to attend cosplay events.

Cosplay Books in the Library

There are many cosplayers and cosplay groups/communities based in Massachusetts. Here are a few to get you started:

Information on and photographs of events hosted by the New England Cosplay Community.

A Facebook page featuring cosplay photographs and events, both locally and across the United States.

Information on Cosplay at one of the largest conventions in the Northeast.

Held in New York City each October, the New York Comic Con is the largest con in the country.

This four-day con is held each July and was the largest convention in the United States for many years.

Each April, this multi-genre pop culture convention features the C2E2 Crown Championship of Cosplay, the country's largest and most prestigious cosplay competition.